0 0 Govind Soni Friday, June 02, 2017 Edit this post
BEHAVIOR THERAPY
Behavior therapy is a set of wide ranging procedures that differ in how they are applied to individuals with various emotional, physical, and psychological difficulties.
Classical conditioning 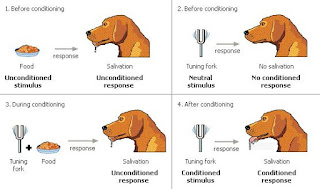 It is a process of learning that was introduced by Russian Physiologist Pavlov.
In his experiments with dogs, during which he hoped to learn more about the digestive process, he inadvertently discovered that organisms can learn to respond in specific ways if they are conditioned to do so.
Operant conditioning
Components of Operant Conditioning:
Some key concepts in operant conditioning:
·         A reinforce is any event that strengthens or increases the behavior it follows.
·         There are two kinds of reinforcers:
o   Positive reinforcers are favorable events or outcomes that are presented after the behavior.
o   In situations that reflect positive reinforcement, a response or behavior is strengthened by the addition of something, such as praise or a direct reward.
o   Negative reinforces involve the removal of an unfavourable events or outcomes after the display of a behaviour.
o   In these situations, a response is strengthened by the removal of something considered unpleasant.
o   In both of these cases of reinforcement, the behavior increases.
·         Punishment, on the other hand, is the presentation of an adverse event or outcome that causes a decrease in the behaviour it follows.
·         There are two kinds of punishment:
o   Positive punishment, sometimes referred to as punishment by application, involves the presentation of an unfavourable event or outcome in order to weaken the response it follows.
o   Negative punishment, also known as punishment by removal, occurs when an favourable event or outcome is removed after a behaviour occurs.
o   In both of these cases of punishment, the behaviour decreases.
o   It is a form of treatment for problems in which a trained person deliberately establishes professional relationship with the client , with the objective of removing or  existing symptoms & promoting positive personality, growth & development. 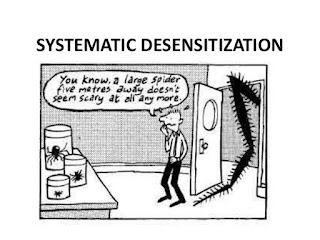 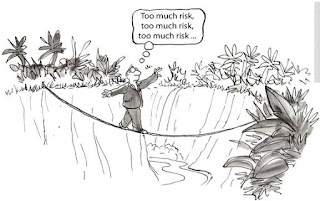 Sometimes called Implosive therapy , is also used to desensitize individuals to phobic stimuli. Here the individual is flooded with a continuous presentation of phobic stimulus until it no longer elicits anxiety.
3.Aversion Therapy
·         Pairing of unpleasant stimulus with an unpleasant response , so that even in the absence of unpleasant response the pleasant stimulus become unpleasant by association .
·         Punishment is presented immediately after specific behavioral response & the response is evenly inhibited.
·         Unpleasant is produced by electric stimulus , drugs, social disapproval or even fantasy.
·         Indications are Alcoholic abuse, paraphilias, Homosexuality, Transvestism.
Overt sensitization- It is a type of aversion therapy that produces unpleasant consequences for undesirable behaviour. For eg,- Disulfiram (Ant abuse) 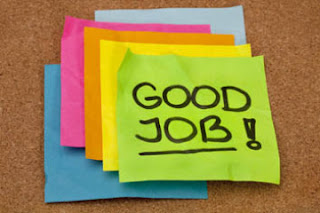 ·         When a behavioural response is followed by generally rewarding event such as food , praise or gifts, it tends to be strengthened & occurs more frequently than before the reward.
·         This technique is use to increase desired behaviour.
Token Economy-
·         A token economy is a form of behaviour modification designed to increase desirable behaviour and decrease undesirable behaviour with the use of tokens.
·         Individuals receive tokens immediately after displaying desirable behaviour.
·         The tokens are collected and later exchanged for a meaningful object or privilege.
5. Operant conditioning procedures to teach new behaviours
1.   Modelling-
·         Modelling refers to the learning of new behaviours by imitating the behaviour in others.
·         Role models are the individuals who have qualities or skills that a person admires & wishes to imitate.
·         Modelling occurs in various ways. Children imitate the behaviour pattern of the patient, teacher, friends & others.
·         Adults & children alike model many of their behaviours after individuals observed on television & in movies .
·         Unfortunately , modelling can result in maladaptive behaviour , as well as adaptive
2.   Shaping-
·         In shaping the behavior of others , reinforcements are given for increasingly closer approximations to the desired response.
·         For e.g.- In eliciting speech from an autistic child, the teacher may first reward the child for (a) Watching the teacher's lips , then (b) for making my sound in imitation of the teacher , then (c) for forming sounds similar to the word uttered by the teacher .
3.Chaining:
·         It is used when a person failed to perform a complex task.
·         The complex task is broken it to number of small steps & each step is taught to the patient .
·         In forward chaining- one start with the first step & accomplishes the task.  In backward chaining starts with the last step & accomplishes.
6. Operant conditioning procedures for decreasing maladaptive behavior
Extinction-
·         In behavior modification, extinction eliminates the incentive for unwanted behavior by withholding the expected response.
·         A widespread parenting technique based on extinction is the time-out, in which a child is separated from the group when he or she misbehaves.
·         This technique removes the expected reward of parental attention. This is commonly used when patient exhibits odd behavior.
Punishment:
·         Aversive stimulus is presented contingent upon undesirable response.
·         The punishment procedure should be administered immediately & consistently following the undesirable behavior with clear explanation
Time out
·         It is an aversive stimulus or punishment during which client is removed from the environment where the unacceptable behavior is being exhibited .
·         The client is usually isolated so that reinforcement from the attention of others is absent.
Premark Principle
·         This technique named for its originator states that a frequently occurring response (Rl)can serve as a positive response for response (R2) that occurs less frequently (Premack, 1959). Those is accomplished by allowing R1 to occur only after R2 has been performed.
·         For e.g.. 13 yr old Jennie has been neglecting her homework for the past few weeks. She spends great deal of time on telephone talking to her friends. Applying the Premack principle being allowed to talk on the phone to her friends could serve as a positive reinforcement for completing her home work.
Restitution (Over correction):
·         It means restoring the disturbed situation to a state that is much better than what it was before the occurrence of the problem behavior.
·         For e.g.- If the patient passes urine in the ward he would be required to not only to clean the dirty area but also mop the entire/ larger area of the floor in the ward
Response cost:
·         This procedure used with individuals who are on token programs for teaching adaptive behaviour .
·         When undesirable behaviour occurs , a fixed number of tokens or points deducted from which individual has already earned .
7.   Contingency contracting-
·         A contract is drawn up among all parties involved .The behaviour change that is desired is stated explicitly in writing .
·         The contract specifies the behaviour change desired & the reinforcers to be given for performing desired behaviours.
·         The negative consequences or punishers that will be rendered for not fulfilling the terms of the contract are also delineated.
·         The contract is specific about how reinforcers & the punishment will be presented,
·         However , flexibility is important so that renegotiations can occur if necessary
8.   Assertiveness & Social skills training
·         Assertiveness training is a behaviour therapy technique in which the patient is given training to bring about change in the emotional & other behavioural pattern by being assertive.
·         Client is encouraged not be afraid of showing an appropriate response , negative or  positive, to an idea or suggestion.
·         Assertive behaviour training is given by the therapist , first by role play & then by practice in a real life situation.
·         Attention is focussed on more effective interpersonal skills
·         Social skills training helps to improve social manners like encouraging eye contact, speaking appropriately , observing simple etiquette, & relating to people
Role of a Nurse -
·         There are three basic roles for the nurse involved in Behavioural therapy. Each of these roles can be performed by all nurses at various levels of expertise -
·         Providing direct patient care
·         Planning treatment programmes
·         Teaching others the use of behavioural techniques