Seizure: A transient dysfunction of brain due to an abnormal firing of cerebral neurons, which may or may not have a clinical manifestation.
OR
Seizures are episodes of abnormal motor, sensory, autonomic, or psychic activity (or a combination of these) resulting from sudden excessive discharge from cerebral neurons
EPILEPSY - Definition
The epilepsies are a group of disorders characterized by chronic recurrent paroxysmal changes in neurologic function caused by abnormalities in the electrical activity of the brain
OR
Epilepsy is a group of syndromes characterized by recurring seizures.
Epidemiology
·         Incidence: Developed countries: 40-70 per one lakh
·         Developing countries: 100-190 per one lakh
·         Prevalence: Developed countries: 4-10 per 10,000
·         Developing countries: 57 per 10,000
·         Partial seizures with or without generalization is most common.
·         Men affected 1-2.4 times compared to women
Etiology
Primary (idiopathic): Inherited disorder
Secondary- when the cause is known and the epilepsy is a symptom of another underlying condition.
They are-
·         Birth trauma
·         Asphyxia neonatorum
·         Head injuries
·         Stroke
·         Some infectious diseases (bacterial, viral, parasitic)
·         Toxicity (carbon monoxide and lead poisoning)
·         Metabolic and nutritional disorders
·         Circulatory problems
·         Fever
·         Drug or alcohol intoxication
·         Brain tumors
·         Abscesses
·         Congenital malformations
·         Complication of pregnancy

3.       UNCLASSIFIED EPILEPTIC SEIZURES
Includes all seizures that cannot be classified because of inadequate or incomplete data and some that defy classification in hitherto described categories.
This includes some neonatal seizures, e.g., rhythmic eye movements, chewing, and swimming movements. 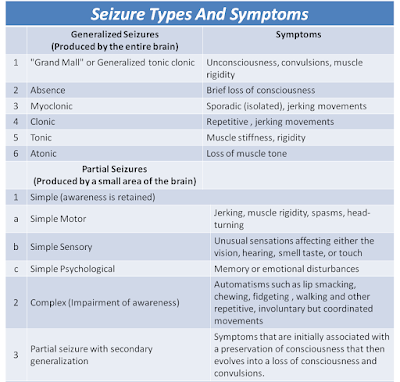 CLASSIFICATION
1.Partial seizures
·         Partial seizures are focal in origin and affect only part of the brain.
·         Caused by focal irritations
·         Manifest with unilateral manifestations that arise form localized brain involvement
·         Simple/ complex
·         Simple partial- consciousness is not impaired
·         Complex partial- consciousness is impaired
Simple partial seizures
·         Also known as focal motor/ focal sensory/ Jacksonian
·         Simple motor and sensory phenomenon
·         Less than 1 minute
·         Only a finger or hand may shake, or the mouth may jerk uncontrollably.
·         The person may talk unintelligibly, may be dizzy, and may experience unusual or unpleasant sights, sounds, odors, or tastes, but without loss of consciousness
Complex partial seizures
·         Involves variety of behavioral, emotional, affective and cognitive functions
·         Usually last longer than 1 minute
·         The person either remains motionless or moves automatically but inappropriately for time and place
·         May experience excessive emotions of fear, anger, elation, or irritability.
·         Involves some alteration in consciousness or a confusion
·         Whatever the manifestations, the person does not remember the episode when it is over.
2. Generalized seizures:
·         Generalized seizures are nonspecific in origin and affect the entire brain simultaneously.
·         Previously referred to as grand mal seizures, involve both hemispheres of the brain, causing both sides of the body to react
Tonic clonic seizure-
·         Characterized by loss of consciousness and falling to the ground if the patient is upright, followed by stiffening of the body ( tonic phase) for 10-20 seconds and subsequent jerking of the extremities (clonic phase) for another 30-40 seconds
·         Cyanosis, excessive salivation, Tongue or cheek biting, Incontinence
·         In the post ictal phase-
o   Muscle soreness, is very tired and may sleep for several hours
o   Some patients may not feel normal for several hours or days after seizure
o   The patient has no memory of the seizure
Typical absence seizure / absence (petit mal) seizure
·         Occurs only in children and rarely continues beyond adolescence
·         Clinical Features-
·         A brief starting spell that lasts only a few seconds, so it often occurs unnoticed
·         Brief loss of consciousness
·         When untreated the seizures occur up to 100 times a day
Atypical absence seizure:
·         Characterized by starting spell accompanied by other signs and symptoms, including brief warning, peculiar behavior during the seizure or confusion after the seizure
Myoclonic seizure: Characterized by a sudden, excessive jerk of the body or extremities
·         The jerk may be forceful enough to hurl the person to the ground
·         Seizures are very brief and may occur in clusters
Atonic seizures/ drop attack
·         Involves either a tonic episode or a paroxysmal loss of muscle tone and begin suddenly with the person falling to the ground
·         Consciousness usually returns by the time person hits the ground
·         Normal activity can be resumed immediately
Phases
l) Prodromal phase-
·         Signs or activity, which precede a seizure (irritability/ tension)
·         Aural phase- with a sensory warning (some may experience whereas others may not)
2) Ictal phase- with full seizure
·         Tonic phase- tonic contraction of the voluntary muscles so that the body stiffens with legs and arms, shrill cry may be heard
·         Clonic phase- characterized by violent rhythmic muscular contractions accompanied by hyperventilation.
·         The face is contorted, the eyes roll, and there is excessive salivation with frothing from mouth.
·         Profuse sweating and tachycardia also present.
3) Post ictal phase –
·         It is the period of recovery after the seizure
·         The extremities limp, breathing is quiet, and pupils (equal/unequal) begins to react to light.
·         On awakening, patients are confused, disoriented, amnesia of the event, headache, generalized muscle ache and fatigue, with sleep for several hours.

SURGICAL MANAGEMENT
Indicated for patients whose epilepsy results from intracranial tumors, abscess, cysts, or vascular anomalies.
Excision of the brain in which the seizures originate without producing significant neurologic deficits
The removal of the area generating the seizures may produce long-term control and improvement
1.Sectioning of corpus callosum —
2.Hemispherectomy or callosotomy
3.Vagal nerve stimulation-
·         Electrode is placed around the left vagus nerve in the neck
·         Connected to a battery placed beneath the skin in the upper chest
·         Device is programmed to deliver intermittent electrical stimulation to the brain to reduce the frequency & intensity of seizures
·         Exact mechanism of action is unknown
·         Stimulation may interrupt synchronization of epileptic brain wave activity
NURSING DIAGNOSES
1. Ineffective breathing pattern related to neuromuscular impairment.
2. Risk for injury related to seizure activity
3. Fear related to the possibility of seizures
4. Ineffective individual coping related to stresses imposed by epilepsy
5. Ineffective therapeutic regimen related to lack of knowledge
6. Deficient knowledge related to epilepsy and its control
NURSING CARE DURING A SEIZURE
·         Provide privacy and protect the patient from curious on-lookers.
·         Ease the patient to the floor, if possible.
·         Protect the head with a pad to prevent injury (from striking a hard surface).
·         Remove patients eye glasses and loosen constrictive clothing.
·         Push aside any furniture that may injure the patient during the seizure.   If the patient is in bed, remove pillows and raise side rails.
·         If an aura precedes the seizure, insert an oral airway to reduce the possibility of the tongue or cheek being bitten.
·         Do not attempt to try open jaws that are clenched in a spasm to insert anything. Broken teeth and injury to the lips and tongue may result from such an action.
·         No attempt should be made to restrain the patient during the seizure because muscular contractions are strong and restraint can produce injury.
·         If possible, place the patient on one side with head flexed forward, which allows the tongue to fall forward and facilitates drainage of saliva and mucus.
·         If suction is available, use it if necessary to clear secretions.
·         Stay with the patient throughout the seizure to ensure safety.
NURSING CARE AFTER THE SEIZURE
·         Keep the patient on one side to facilitate drainage of secretions and prevent aspiration.
·         Make sure the airway is patent.
·         Suctioning may be necessary
·         Allow the patient to sleep after the seizure
·         There is usually a period of confusion after a grand mal seizure. A short apneic period may occur during or immediately after a generalized seizure. The patient, on awakening, should be reoriented to the environment.
·         If the patient becomes agitated after a seizure (postictal), use calm persuasion and gentle restraint.
HOME CARE
·         Take medications daily as prescribed to keep the drug level constant to prevent seizures.
·         The patient should never discontinue medications, even when there is no seizure activity.
·         Keep a medication and seizure chart, noting when medications are taken and any seizure activity,
·         Notify the patient's physician if patient cannot take medications due to illness.
·         Have antiseizure serum levels checked regularly.
·         Avoid activities that require alertness and coordination (driving, operating machinery) until after the effects of the medication have been evaluated.
·         Report signs of toxicity so dosage can be adjusted. (drowsiness, lethargy, dizziness, difficulty walking, hyperactivity, confusion, inappropriate sleep, and visual disturbances)
·         Avoid over-the-counter medications unless approved by the patient's physician.
·         Avoid seizure triggers, such as alcoholic beverages, electrical shocks, stress, caffeine, constipation, fever, hyperventilation, hypoglycemia.
·         Carry a medical alert bracelet or identification card specifying the name of the patient's antiseizure medication and physician.
·         Take showers rather than tub baths to avoid drowning if seizure occurs; never swim alone.
·         Exercise in moderation in a temperature-controlled environment to avoid excessive heat.   Develop regular sleep patterns to minimize fatigue and insomnia.
Complication:
Physical
·         Status epilepticus
·         Permanent brain damage
·         Ventilatory insufficiency
·         Hypoxemia
·         Cardiac dysrhythmias
·         Systemic acidosis
·         Severe injury/ trauma & death
Psychosocial
·         Effect on the patients lifestyle
·         Ineffective coping
·         Social stigma

STATUS EPILEPTICUS
Status epilepticus (acute prolonged seizure activity) is a series of generalized seizures that occur without full recovery of consciousness between attacks
The term has been broadened to include continuous clinical or electrical seizures lasting at least 30 minutes, even without impairment of consciousness.
It is considered a medical emergency.
Factors that precipitate status epilepticus
·         Withdrawal of ant seizure medication
·         Fever
·         Concurrent infection
·         Withdrawal from alcohol, sedatives or other drugs
·         There is some respiratory arrest at the height of each seizure that produces venous congestion and hypoxia of the braine
·         Repeated episodes of cerebral anoxia and edema may lead to irreversible and fatal brain damage.
Medical Management
·         Airway and adequate oxygenation
·         If the patient remains unconscious and unresponsive- endotracheal tube intubation
·         IV- diazepam (Valium), lorazepam (Ativan), or fosphenytoin (Cerebyx)
·         Other medications (phenytoin, phenobarbital) are given later to maintain a seizure-free state.   IV line is established, and blood samples are obtained to monitor serum electrolytes, glucose, and phenytoin levels
·         EEG monitoring
·         Vital signs and neurologic signs are monitored
·         IV infusion of dextrose is given if the seizure is due to hypoglycemia.
·         If initial treatment is unsuccessful, general anesthesia with a short-acting barbiturate may be used.